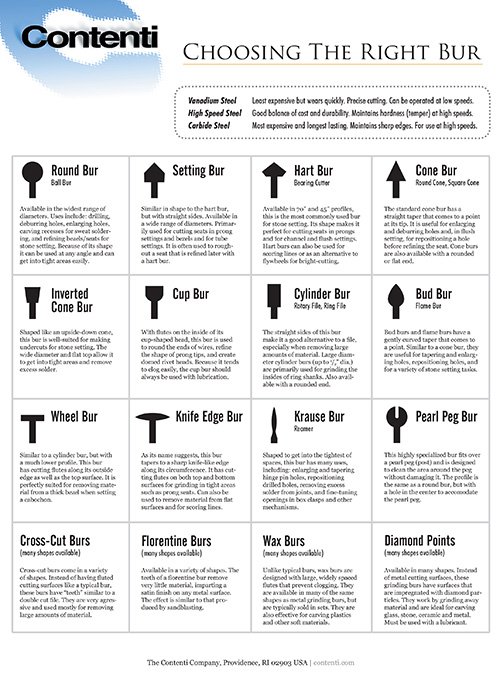 With many styles and shapes to choose from, it's not always easy choosing the right bur for the task at hand. Whether you're looking to grind large amounts of metal, fine-tune jewelry settings, or create wax models, this guide will help you narrow your choices and understand what each type of bur is used for. Download a pdf of Choosing the Right Bur. You can also read a text description of this information below.

Available in the widest range of diameters. Uses include: drilling, deburring holes, enlarging holes, carving recesses for sweat soldering, and refining bezels/seats for stone setting. Because of its shape it can be used at any angle and can get into tight areas easily.

Similar in shape to the hart bur, but with straight sides. Available in a wide range of diameters. Primarily used for cutting seats in prong settings and bezels and for tube settings. It is often used to rough-out a seat that is refined later with a hart bur.

Available in 70˚ and 45˚ profiles, this is the most commonly used bur for stone setting. Its shape makes it perfect for cutting seats in prongs and for channel and flush settings. Hart burs can also be used for scoring lines or as an alternative to flywheels for bright-cutting.

The standard cone bur has a straight taper that comes to a point at its tip. It is useful for enlarging and deburring holes and, in flush setting, for repositioning a hole before refining the seat. Cone burs are also available with a rounded or flat end.

Shaped like an upside-down cone, this bur is well-suited for making undercuts for stone setting. The wide diameter and flat top allow it to get into tight areas and remove excess solder.

With flutes on the inside of its cup-shaped head, this bur is used to round the ends of wires, refine the shape of prong tips, and create domed rivet heads. Because it tends to clog easily, the cup bur should always be used with lubrication.

The straight sides of this bur make it a good alternative to a file, especially when removing large amounts of material. Large diameter cylinder burs (up to 1/2” dia.) are primarily used for grinding the insides of ring shanks. Also available with a rounded end.

Bud burs and flame burs have a gently curved taper that comes to a point. Similar to a cone bur, they are useful for tapering and enlarging holes, repositioning holes, and for a variety of stone setting tasks.

Similar to a cylinder bur, but with a much lower profile. This bur has cutting flutes along its outside edge as well as the top surface. It is perfectly suited for removing material from a thick bezel when setting a cabochon.

As its name suggests, this bur tapers to a sharp knife-like edge along its circumference. It has cutting flutes on both top and bottom surfaces for grinding in tight areas such as prong seats. Can also be used to remove material from flat surfaces and for scoring lines.

Shaped to get into the tightest of spaces, this bur has many uses, including: enlarging and tapering hinge pin holes, repositioning drilled holes, removing excess solder from joints, and fine-tuning openings in box clasps and other mechanisms.

This highly specialized bur fits over a pearl peg (post) and is designed to clean the area around the peg without damaging it. The profile is the same as a round bur, but with a hole in the center to accomodate the pearl peg.

Cross-cut burs come in a variety of shapes. Instead of having fluted cutting surfaces like a typical bur, these burs have “teeth” similar to a double cut file. They are very agressive and used mostly for removing large amounts of material.

Available in a variety of shapes. The teeth of a florentine bur remove very little material, imparting a satin finish on any metal surface. The effect is similar to that produced by sandblasting.

Unlike typical burs, wax burs are designed with large, widely spaced flutes that prevent clogging. They are available in many of the same shapes as metal grinding burs, but are typically sold in sets. They are also effective for carving plastics and other soft materials.

Available in many shapes. Instead of metal cutting surfaces, these grinding burs have surfaces that are impregnated with diamond particles. They work by grinding away material and are ideal for carving glass, stone, ceramic and metal. Must be used with a lubricant.